Manchester United are ready to pounce for the Barcelona starlet Ansu Fati by making an £89m bid.

At the age of 17, the Spaniard has scored five goals in 11 starts and 13 substitute outings for the Catalan giants.

While the teenager still has two years left to run on his current contract, with La Blaugrana possessing the option of extending his terms until 2024, the Red Devils are said to be monitoring the winger’s progression. 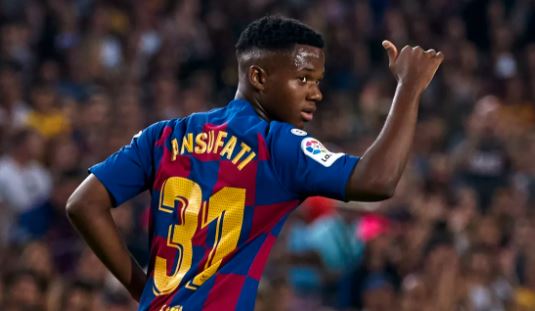 United boss Ole Gunnar Solskjaer is hoping to strengthen his attacking line-up this summer with a winger a top priority and the 2-time English champions will push ahead with their transfer plans despite the financial uncertainty following the coronavirus pandemic.

However, according to Sport, the Spanish champions have no intention of parting ways with Fati in the foreseeable future.

That stance comes despite the La Liga leaders allegedly being in a position where they need to raise funds for their summer targets ahead of the next transfer window.

The report goes on to claim that club officials will not entertain any bids under £150m, a figure which is believed to be Fati’s release clause.